“Give Me Forty Acres (To Turn This Rig Around)” would put The Willis Brothers on the musical map in 1964 with a Top 10 Country hit that would go all the way to #1 in Canada. 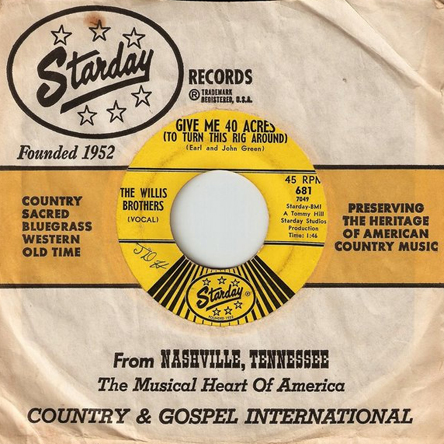 An album of the same name with a pronounced truck-driving theme would follow in 1965, as well as another in 1967 Travelin’ & Truck Driver Hits (recycled + new tracks) plus one last stellar effort Hey Mister Truck Driver! in 1968. 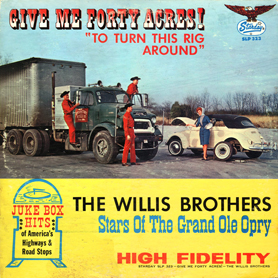 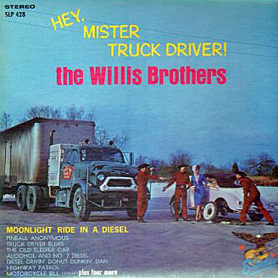 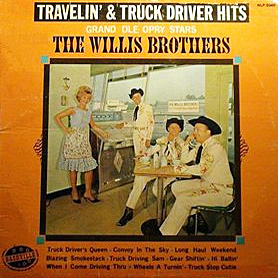 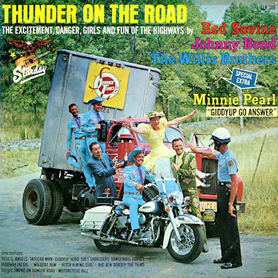 Nathan D. Gibson would note in The Starday Story: The House That Country Music Built:

[Suzanne] Mathis [graphic designer co-responsible for Starday truck driving covers], like many others, got her job at Starday through her neighbor and accordionist, Vic Willis.  The youngest of the Grand Ole Opry’s Willis Brothers trio, John ‘Vic’ Willis was both a recording artist and a song scout for Starday throughout the mid-sixties.  He was also a career counselor on the side.  He convinced [Starday head, Don] Pierce to employ several of his friends and at one point he even had Shot Jackson’s daughter, Arlene, and three of the Willis Brothers’ wives working at Starday.

The Willis Brothers — Charles ‘Skeeter,’ James ‘Guy’ and John ‘Viv’ — began playing professionally in 1932 and already had an impressive resume before joining Starday in 1960.  Aside from making their own recordings for Mercury, Coral, Sterling, and RCA Victor (as the Oklahoma Wranglers), they also backed the immortal Hank Williams on his first recordings for the Sterling label (as the Original Drifting Cowboys), as well as Eddy Arnold for eight years at the peak of his career (1948-57).  By the time they joined the Opry in 1960, they were again known as the Willis Brothers and that same year began a relationship with Starday.

The Willis Brothers have released an impressive number of classic truck-driving 45s on Starday going all the way back to 1961 (i.e., pre-“Six Days on the Road”):

Note:  B-side “When I Come Driving Through” not yet available for preview on YouTube

[Pssst:  Click on the triangle to hear “When I Come Driving Through” by The Willis Bros.] 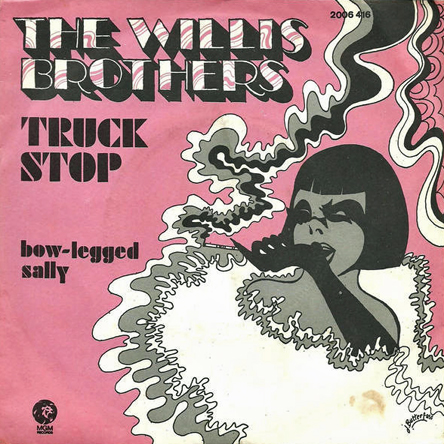 Thanks to “outlaw” voices in country music on “renegade” labels, such as Starday and Shelby Singleton’s Plantation Records, the “new social awareness” would begin to inform the country rockin’ scene by the late 1960s.  1970 would see the release of wry 45 “Women’s Liberation“: 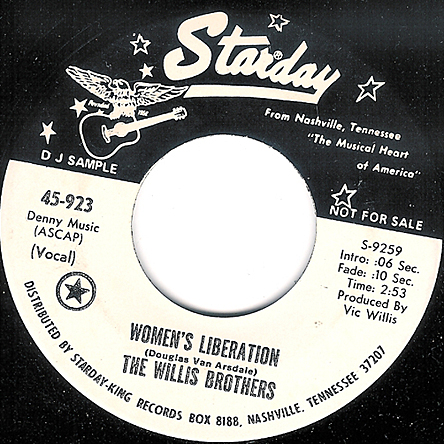