The Steve Miller Band filters reggae through early 70s rock sensibilities, mon, in the 97-second ditty, “The Sun Is Going Down” – from Recall the Beginning … A Journey from Eden, their seventh album for Capitol:

Four drummers credited on this album – Gary Mallaber, Jim Keltner, Roger Allen Clark & Jack King – not sure who’s keeping time on this track.  Album recorded in one day — not unlike Joe Pass’s Stones Jazz album — specifically, on January 29, 1972 (“completed on the full eclipse of the moon”).

Interesting to see Jamaican singer, Shaggy, utilize the bass line from 1973’s “The Joker”  nearly 40 years later in his #1 hit, “Angel” (that also borrows from “Angel of the Morning,” a song issued in 1968 rocksteady fashion by Joya Landis on Jamaica’s Treasure Isle label).

The legalese on the label – “Apple Publishing ltd” – caught my eye … 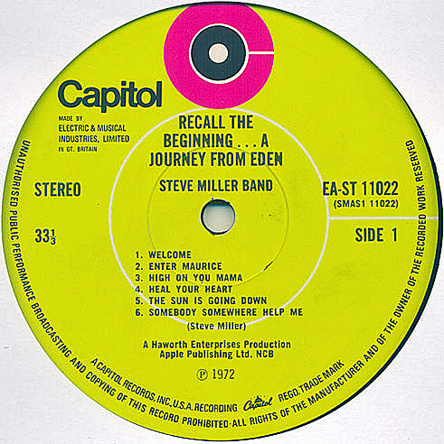 … and sure enough, there’s an interesting side story there courtesy of Empoprise MU:

“Out of all the Apple departments that were cut by Allen Klein, his decision to effectively close down Apple Publishing made the least sense from a business perspective…Apple also held the European publishing rights for several promising American acts, including the Steve Miller Band…Although Apple Publishing was a large department with a staff that ranged from five to seven people, it was one of the few Apple divisions that saw any return on Apple’s investment.  According to Mike O’Connor, Apple was ready to sign UK publishing agreements with both Randy Newman and Harry Nilsson when Klein shut the department down.”