The JB’s Debut: Polydor not King

The debut album by The JB’s — James Brown‘s backing band that included a group of Cincinnati musicians who would soon join forces with George Clinton’s Parliament-Funkadelic and later form the core of Bootsy’s Rubber Band — was originally scheduled for release in July, 1971 on the King label (SLP 1126), as noted on Discogs.  Starday-King even issued a test pressing, with Ron Lenhoff overseeing the engineering and editing of this four-song LP, half of which (“The Grunt” and “These Are the J.B.’s”) was recorded at King’s Cincinnati studios on May 19, 1970, and the other half (“I’ll Ze” and “When You Feel It Grunt If You Can”) recorded at Starday Studios in Nashville on June 30, 1970. 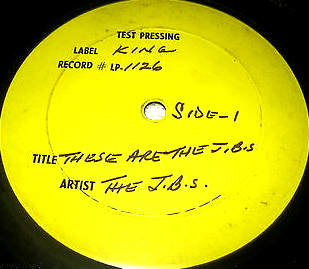 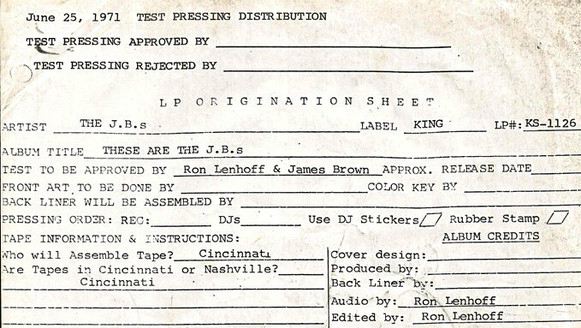 But alas, it was not meant to be** — as one Discogs contributor wryly observes:

Mmm. I wonder how many people have one of these [test pressings] … other than James Brown himself, Hal Neely, Dave Matthews, Charles Bobbit and anybody directly involved in King Records (as in office staff), most of the members of the band probably never got a copy of this TP, as this was at the precise point when JB’s catalogue got bought out by Polydor and the JB’s (Mk.1) had already exited stage left.  Probably 25-50 made max.

The original These Are the J.B.’s LP comprised just four tracks (click on audio links):

James Brown would describe the band in his 1986 autobiography thusly:

They were called the Pacesetters and were all from Cincinnati.  They’d hung around King for awhile and then started doing session work there.  I had used them myself on several things.  Bootsy Collins (who later went on to become a big star with the Parliament-Funkadelic Thang and his own Rubber Band) was the bass player; his older brother, Phelps ‘Catfish’ Collins played guitar; Frank ‘Kash’ Waddy played drums; Robert McCullough played sax; a fella called Clayton ‘Chicken’ Gunnels played trumpet.

“These Are the J.B.’s” – songwriting credits per Discogs

“The Grunt” – songwriting credits per Discogs

“Medley: When You Feel It Grunt If You Can” – songwriting credits per Discogs

Note:  “When You Feel It Grunt If You Can” includes portions of “Let The Music Take Your Mind,” written by Kool & The Gang and Gene Redd Jr.; “Chicken Strut,” written by The Meters; and “Power Of Soul,” written by Jimi Hendrix.

The following year in 1972, when Polydor released what would be known as the debut album by The J.B.’s, a much different collection of songs would would end up in the marketplace, as Food For Thought comprised ten songs [“The Grunt” & “These Are the J.B.’s (Pt. 1)” being the only overlapping tracks] vs. the four song set as mixed and sequenced by Ron Lenhoff.

Funk fans worldwide rejoiced in 2014 when the original four-song mix enjoyed release on vinyl (as well as digital download) for the first time, with a 12-page booklet of liner notes by Alan Leeds stating that, in fact, only two test pressings are known to have existed (so says a Discogs contributor).  Worth pointing out that “the originally scheduled issue of this album included overdubbed crowd noise — for this issue of the album, the original, undubbed two-track stereo mix was used as source.” 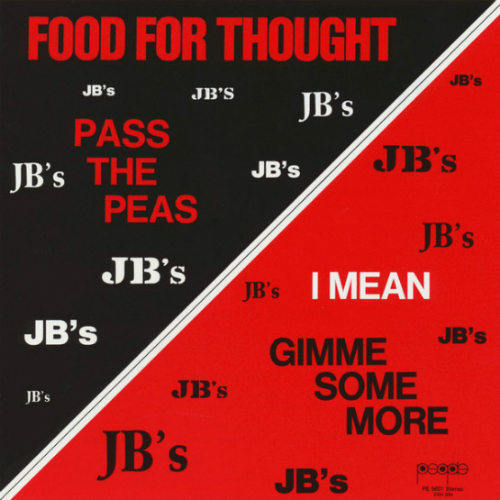 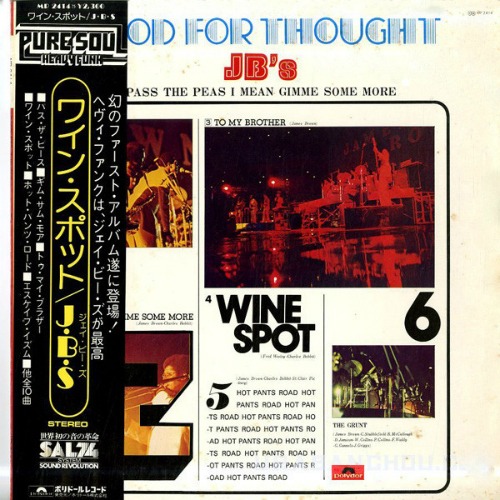 “The Grunt” – famously sampled for 1987’s “Rebel Without a Pause” by Public Enemy – would enjoy single release on King in August of 1970, just three months after being recorded.  Billboard would select the single in the August 8, 1970 edition for its Top 20 Soul Spotlights “predicted to reach the Top 20 of the top-selling R&B Singles chart.” 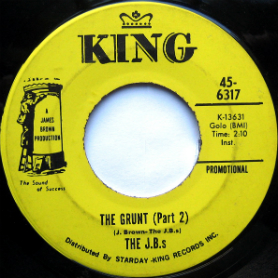 A second single – “These Are the J.B.’s” (Pts. 1&2)” – followed in November, 1970.  Billboard‘s Ed Ochs would select the 45 for his “picks and plays” for the week of October 24, 1970 in his ‘Soul Sauce’ column.  Interesting to point out that the same Billboard November 21, 1970 issue that mentions Starday-King release of “These Are the J.B.’s” also notes that “the James Brown Show played Fargo, N.D. recently – the good response was particularly encouraging because this was the first time his show had ever played that state.” 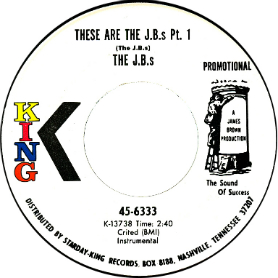 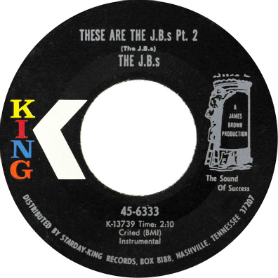 R&B guitarist Phelps “Catfish” Collins, a veteran of James Brown’s J.B.’s, Parliament-Funkadelic and his younger brother William “Bootsy” Collins‘ Rubber Band, passed away at his home in Cincinnati on Aug. 6 at the age of 66, following a long battle with cancer.

Bootsy Collins issued a statement saying that “my world will never be the same” without his brother.  “Be happy for him, he certainly is now and always has been the happiest young fellow I ever met on this planet.”

Bootsy’s wife, Patti Collins, told The Cincinnati Enquirer that Catfish “was a father figure to my husband.  He’s the reason why Bootsy is who he is.”

Catfish, eight years Bootsy’s senior, was the one who suggested his brother put bass strings on an old guitar, and the two were part of a Cincinnati group called The Pacemakers that became the rhythm section for the city’s famed King Records label.  James Brown recruited the Collins brothers, and starting in 1968 they played on Brown classics such as “Get Up (I Feel Like Being a) Sex Machine,” “Give It Up or Turnit a Loose,” “Super Bad” and “Soul Power” as the J.B.’s.

By 1971 they had left Brown’s employ, going on to form The House Guests and then joining Funkadelic in 1972 for albums such as America Eats Its Young and Cosmic Slop.  Catfish remained with the group — which also lost guitarist Garry Shider to cancer in June — until the mid-’80s.

“(Catfish) was a hell of a musician,” keyboardist Bernie Worrell, who played with the guitarist in Funkadelic, told the Enquirer.  “People seem to forget that the rhythm guitar behind James Brown was Catfish’s creative genius, and that was the rhythm besides Bootsy’s bass.”

George Clinton alumnus Dumine DePorres seconded that notion, telling Billboard.com that Catfish’s particular niche was playing “the subliminal stuff, those inferred parts that you might not be able to hear right out front but without it there’s a big hole.  It’s like the glue that holds the glue together.”

After Funkadelic, Catfish went on to play in Bootsy’s Rubber Band and also recorded with Deee-Lite, Freekbass and H-Bomb [Ferguson].  In 2007 he reunited with Bootsy, Worrell, Clyde Stubblefield and others for the soundtrack to the Judd Apatow comedy “Superbad.”  A number of Cincinnati musicians gathered to play a tribute show for Catfish during July at a club in Roselawn, Ohio [Celebrities night club in the Valley Shopping Center on Reading Road, just a mile down the road from the Carrousel Inn].

Funeral arrangements have not been announced for Catfish, who had two children. 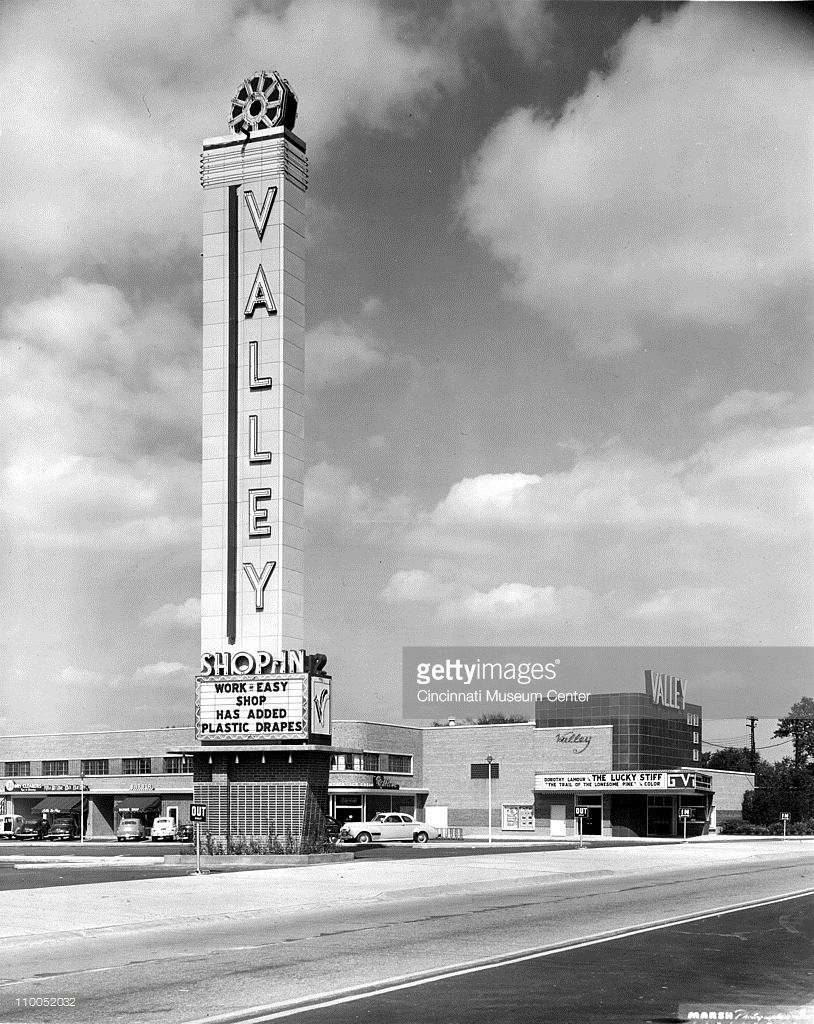 KENNEDY HEIGHTS – Before there was Bootsy, there was Catfish.

The older brother of Cincinnati’s legendary funk icon, Phelps “Catfish” Collins was a jovial guitar player with a huge smile, a mentor who helped shape his brother’s musical career as well as his life.

“He was a father figure to my husband,” said Patti Collins, William “Bootsy” Collins’ wife. “He’s the reason why Bootsy is who he is.”

Phelps Collins died Friday after a long battle with cancer. He was 66.

Mr. Collins was a lifelong musician and Cincinnati resident. He was born eight years before Bootsy, who gave him the nickname “Catfish” because he thought he looked like one.  He was fiercely protective of his family, once threatening to kill his father with a butcher knife if he saw him hurt their mother again, Bootsy told the Enquirer in an interview last year.

In 1968, Phelps and Bootsy Collins helped form local R&B band the Pacemakers, which became the rhythm section at the renowned King Records in Evanston.  They played with James Brown, backing him on such songs as “Get Up (I Feel Like Being a) Sex Machine” as part of a group that became known as the J.B.’s.

In 1971, the brothers formed a flashy funk group called the House
Guests with band mates including drummer Frankie “Kash” Waddy and
former Pacemakers singer Philippé Wynne.  Wynne went on to lead a group
called the Spinners, and the rest joined the free-wheeling Parliament-
Funkadelic.

Rock and Roll Hall of Fame keyboardist Bernie Worrell played with the
Collins brothers in Parliament-Funkadelic.  Worrell said he and Catfish
were the elders of the group.

“He was a loving, caring person, but at the same time, he wouldn’t
take any bullcrap when it came to business,” Worrell said.  “He was a
hell of a musician.  He taught me a lot about rhythms.  People seem to
forget that the rhythm guitar behind James Brown was Catfish’s
creative genius, and that was the rhythm besides Bootsy’s bass.”

Phelps Collins later joined Bootsy’s Rubber Band and would go on to
play rhythm guitar on albums by Deee-Lite, Freekbass and H-Bomb [Ferguson].  He also performed on the soundtrack to the 2007 Judd Apatow comedy
“Superbad” with Bootsy Collins, Bernie Worrell and other original
members of the J.B.’s.

“He was one of probably the most underrated musicians in R&B and funk
history,” said Cincinnati bassist Chris “Freekbass” Sherman, who cites
both Collins brothers as influences.  “He’s such an amazing guitar
player.  No one did it like him.”

Patti Collins said her brother-in-law, a father of two who lived in
Kennedy Heights, made a life of music and continued to collaborate
with Bootsy as the brothers grew older.

About a month ago, local musicians gathered at Celebrities in Roselawn
to perform a tribute to Catfish, said Lincoln Ware, who hosts a daily
radio show on WDBZ-1230 AM.

Ware said Mr. Collins, always a boisterous and smiling presence,
clearly wasn’t feeling his best that night.  But he sat back anyway,
soaking in the music that had always meant so much to him. 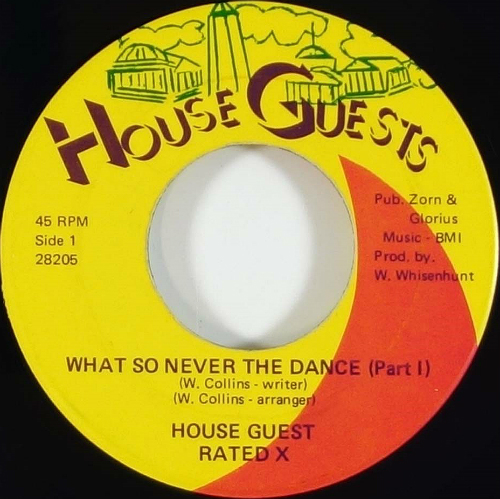 The Other Lost King Album With the JBs

As it turns out, more than one planned project got shelved when James Brown made the big decision to leave Starday-King and sign on the dotted line with Polydor, to wit:

**TONIGHT – One Night Only!

In August 1971, James Brown planned to release a triple vinyl album of his electrifying March 1971 concert at the Olympia in Paris, backed by the original JB’s, featuring Bootsy and Catfish Collins.  Sequenced and mixed by Brown himself for a King Records release, he considered it among his best work.  However, when Brown’s contract was sold to Polydor Records, the masters were shelved and the album was not released.  The complete concert recording would not be heard until 43 years later when Sundazed Records released it on “tri-fold” vinyl in July 2014.  Join Bootsy Collins protege, Freekbass, as he plays the album on his own Funk Radio show = streaming on Radio Artifact, and simulcast on Cincinnati’s WVXU FM (listen here).

Note:  Cincinnati music history fans will be interested to know that Kenny Poole (guitar) and arranger, David Matthews (organ) join The JB’s on one song — “Who Am I” — a tune on which James Brown plays on drums (assuming that Zero to 180 is correctly reading the musician credits).