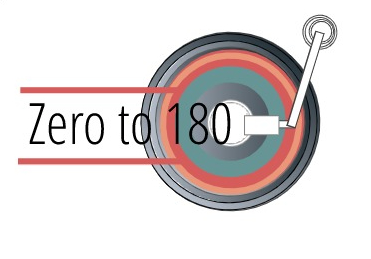 Several months ago, I received a surprise phone call from writer, Steve Rosen, who informed me that he was putting together a feature article for Cincinnati Magazine that uses my “Cincinnati in Song” piece as a launching point.. Furthermore, for this piece, I was invited to contribute a 500-word sidebar of my Top Ten Cincinnati songs — such a marvelous birthday gift! . To help generate buzz for this article (entitled “Sing a Song of Cincinnati“) in the magazine’s December issue, I rolled out my Top Ten on Zero to 180’s Facebook page one song per day (beginning December 1st), with supplemental historical details not previously disclosed.

Unfortunately, today’s post threatens to undo all the positive momentum, as a result of the misguided decision to unfurl a new guitar arrangement of the “Midnight Cowboy” theme by Silver Spring-based music duo, Dubble Trubble.

Dub-inspired pop fusion (or so it says in their press packet), this take on John Barry‘s haunting soundtrack theme may one day end up as the title track of the duo’s debut collection — Twelve O’Clock Cowboys — of late-night sounds (streaming audio link):

Richard Harrington recently observed that Joni Mitchell submitted her own composition for the film — titled “Midnight Cowboy” — only to have the song rejected!. The sole recording of Mitchell’s soundtrack offering, notes Harrington, can be found on the Atlantic debut album by Washington, DC’s one-time “favorite folk singer” (and Roberta Flack collaborator), Donal Leace, who departed us this past November due to COVID-19.

Richard Harrington graciously shared his own research notes about Donal Leace to help ensure this information is distributed to the widest possible audience:

“By day, Chappelle’s teachers could sense an idiosyncratic mind at work. ‘He was interested in the thing that makes something happen, the motivation behind things,’ says Donal Leace, whose theater history class was a freewheeling forum for students to try out monologues and scenes. Years later, in tribute to one of his favorite teachers, Chappelle brought a camera crew back to Leace’s classroom to film a scene for ‘Chappelle’s Show.'”