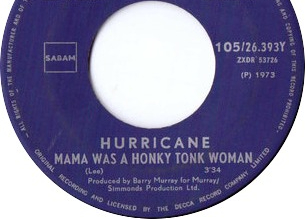 Just when you thought the “Honky Tonk Woman” carcass had been picked completely clean, one more interesting thing would somehow turn up — this moving and quaintly rocking tale of a British working-class family:

One-time Rolling Stone percussionist, Carlo Little, would document his experience with Hurricane on his own website:

“The greengrocer venture did not herald the end of Carlo’s musical career.  He joined yet another band at this time:  Hurricane, which was put together by producer Mal Gray, and included pianist Freddie ‘Fingers’ Lee, guitarist Dave Wendels, and on bass Stuart Colman.  (Stuart and his wife Janet are Godparents to Carlo’s eldest daughter.  He later had success as a producer and had many hit records with Shakin’ Stevens and others).  Other musicians involved with the band included Dick Middleton and Matthew Fisher.  The band were signed to Decca and recorded an album.

Although their single ‘Mama Was A Honky Tonk Woman‘ had good reviews, they did not manage to achieve further success.”

“Later that year [1971] Stuart joined Hurricane, a band originally formed by Mal Gray (of the Wild Angels).  As it turned out, Gray only briefly performed with the band, however they proved popular touring on the Northern club circuit.  The other band members were established in British Rock n Roll; Dave Wendells (guitar) and Carlo Little (drums) had both been with Screaming Lord Sutch, while on piano, the incomparable Freddie Fingers Lee added further mayhem.

SC:  “Freddie would take out his glass eye on stage and throw it to me to catch.  Usually I caught it, but one night I missed and his eye disappeared down a hole in the stage.  We had another gig to go on to, but couldn’t go until we’d found Freddie’s eye, so we went under the stage, crawling around with torches and finally found it all covered in cobwebs.  Freddie put it straight back in!”

On arriving at the next gig an hour late, the promoter refused to believe their excuses and smacked Freddie in the face.  SC:  “We did our set, but we didn’t get paid.”  The glamorous lifestyle of a touring rock n roller!  The band released one single, ‘Mama Was A Honky Tonk Woman’/’Shakin’ an’ Breakin’’ (Decca F13435) which failed to make any impression on the charts despite the ‘B’ side being a strong rocker.”

The use of fuzz bass on the catchy singalong chorus makes for a great hook, not to mention the sweet major 7th key change toward the end that kicks the song into one last gear. 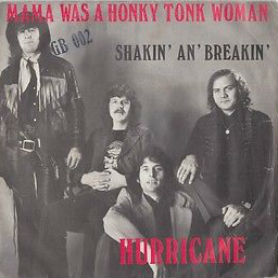 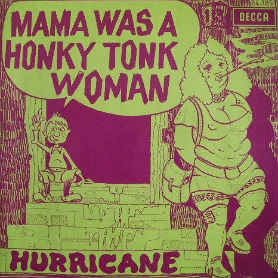