Animator, Ed Seeman – who would later film the Mothers of Invention’s famed 1967 shows at the Garrick Theater in New York City (and quite a bit more over the course of 13 months) – initially joined forces with Frank Zappa when he formally contracted the bandleader and composer to provide the modernist soundtrack for a 30-second Luden’s Cough Drops television ad:

“”I first met Frank when he was playing a steady gig at the Garrick Theater in Greenwich Village.  I hired him to score a 30-second animated TV commercial I was animating and producing for Luden’s Cough Drops.  He requested $2,000 plus a studio for a day with a wide variety of instruments, plus a guy to do cough sounds.

Says Frank Zappa in the liner notes to The Lost Episodes:

“This is the actual track for a Luden’s Cough Drop commercial that won a Clio Award in 1967 for Best Music for a Commercial.  A freak in an ad agency who was an animator, Ed Seeman, who came to the Garrick shows, did the pictures and recruited me to do the music.  I went along with it.  The commercial shows a squiggly white thing that’s supposed to be the cough wriggling around.  A box of Luden’s appears on the left side of the screen, like a monolith, and squashes it.”

Den Simms, Eric Buxton & Rob Samler would interview Frank Zappa in the September, 1990 edition of Society Pages for “They’re Doing The Interview of the Century (pt. 3)“:

EB: Do you have the CLIO?

EB: Was it presented to you?

FZ: No, I found out about it after the fact. I mean, they don’t invite me to CLIO ceremonies, but the advertising agency that did it, y’know, they told me that it got a CLIO. 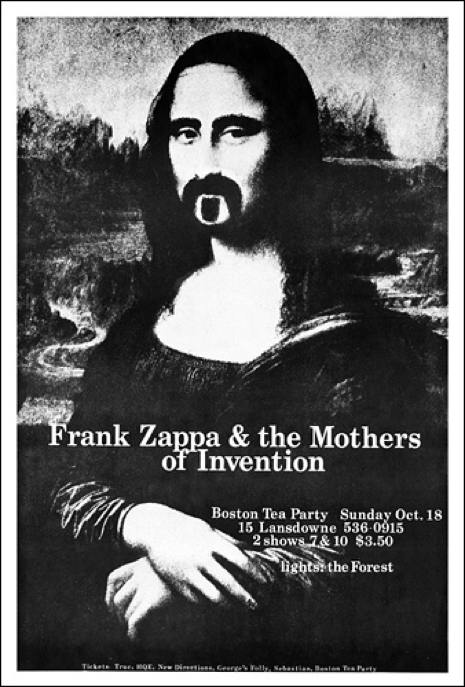 Public television’s The History Detectives would also incorporate this advert into its episode “Frank Zappa’s Lost Collage” about a long-time art collector who found an early 1960s modernist collage with an intriguing “FZ” signature that may or may not have been created by Frank Zappa.

Ed Seeman (who is on Facebook) adds this coda to the story:

“Just want to mention that chronologically I hired him to score my Ludens Commercial first, then after we worked together on that I went to the Garrick Theater and filmed some stuff that was put together for a three minute film he used for a convention about underground merchandising which is why he tore up the FREAK OUT album on camera.  I also recollect he also used it at a Hagstrom guitar event.  After that filming and editing together experience that he enjoyed we then decided to continue working together and putting together footage that he would eventually use for a film idea he had called UNCLE MEAT which he later released with a lot of other footage.

After separating the next year and after i had amassed 14 hours of footage and had traveled to London and Amsterdam with the group and I saw it was never going to come to an end I finally had to sue him and we settled with him paying me (GRYPHON PRODUCTIONS) $25,000 for the footage.  He used many pieces of our footage in subsequent releases but I regret that the world hasn’t seen this footage that hopefully is still stored in his vault.

After many years of trying to get Gail [Zappa] to release my version I finally decided to sell it on my own.  Although ZFT’s attorney stopped me from selling T-Shirts on Zazzle, I still sell them on my Ebay store as well as the DVD.

My rationale which I wrote to their attorney is that if they can copyright the music I hired and paid for then I can sell this version of my footage.”