Jon Landau, in his thoughtful analysis of the contemporary pop scene – “Rock 1970” – for the December 10, 1970 edition of Rolling Stone, made the following statement about Billy Preston‘s former writing partner:

“While it may be sacrilegious to say it, the most influential black artist of recent years, with the possible exception of Jimi Hendrix, has undoubtedly been Sly and the Family Stone.  In the early R&B days it was not uncommon for songs to have one chord.  Sly has revitalized that concept and recharged it with contemporary rhythms and a group singing approach that is a pure delight.  His versatility and capacity to synthesize seems almost endless.

Both the singing and the rhythm have been completely absorbed by Motown, with the Temptations making greater use of the former and the Jackson 5 modeling themselves on the latter.  Without ‘Dance to the Music’ there never would have been ‘I Want You Back.’  His influence has been vast.  Even Lulu has cut her Sly imitation of ‘Hum A Little Song From My Heart [sic].'”

Have a listen for yourself – it might make you chuckle:

Lulu, you might recall, was part of a late 60s/early 70s trend of prominent female vocalists, who tried to tap into the commercial heat coming from the US South by recording albums in such places as Muscle Shoals, inspired no doubt by the critical success of Dusty Springfield’s classic Dusty in Memphis LP and its Top 10 hit, “Son of a Preacher Man.” 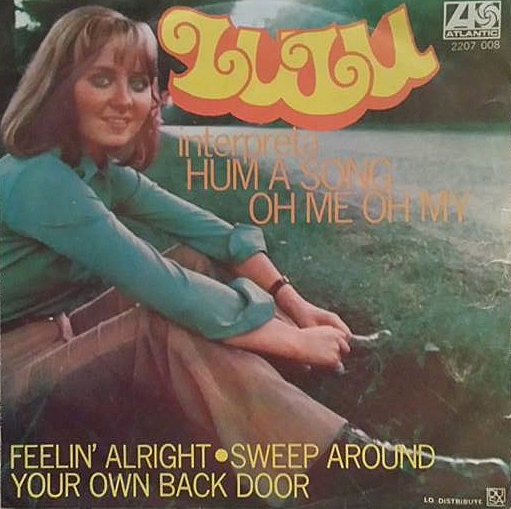 “Hum a Song” would be the A-side of an Atlantic single that almost hit the Top 40 in the US and Canada.   “Hum a Song” would also enjoy release on a 4-song Mexican EP that, curiously, surrounds this track with three songs from New Routes — her previous LP – an album that features guitar work by Duane Allman.  Check out Duane’s soulful opening lines on the track “Sweep Around Your Own Back Door“:

Just occurred to me that this is the third song from a critical 12-month period straddling the years 1969-1970  that has to do with “cleaning up” one’s own “back yard” — Elvis’s “Clean Up Your Own Back Yard” and Dion DiMucci’s “Your Own Back Yard.”   Spooky.

This past January, guitarists Derek Trucks and Warren Haynes announced they would no longer perform with the Allman Brothers after this year.  Last week, the Allman Brothers Band as we know it played their final run of shows ever at NYC’s Beacon Theatre – six in all, with the final one on October 28.  As Alan Paul reported in the October 29, 2014 edition of Billboard:

“The first two nights (Oct. 21 and 22) at the Beacon were solid but unspectacular. Then, on Oct. 24, two Gibson Les Pauls that belonged to Duane Allman, the band’s late leader, arrived from the Rock and Roll of Fame and animated the band, which played its best show in five years.  Trucks and Haynes’ playing took on more urgency, and Gregg sang with power and passion throughout the night.  The burst of energy was testament to the remarkable influence Duane exerts on the act he founded, even 43 years after his death in a motorcycle accident in 1971.”

I stumbled upon Link Wray‘s sly and heartfelt tribute to Duane Allman – “I Got to Ramble” – a track from 1974’s The Link Wray Rumble album.  Link is no doubt trading off the linguistic tango – “Rumble” (his big 1958 outlaw hit) vs. “Ramble” (Allman Brothers’ 1973 radio staple, “Ramblin’ Man“) – to great effect.  But it’s a funny moment later when you hear the twin lead guitars playing in tight harmony, combined with the “Ramblin’ Man” concept — wait a minute, this is a tribute to Dickey Betts, not Duane!

Polydor did not release many singles during Wray’s tenure with the label in the 1970s, but for Link’s first 45 – “Fire and Brimstone” b/w “Juke Box Mama” (released in Australia, as well as the UK & US) Polydor did something different for the US market, in that they issued a promo 45 with a different A-side, “Fallin’ Rain” (paired with the same B-side, “Juke Box Mama”) the following year for some reason.  Polydor would then issue one more single in the UK – “Lawdy Miss Clawdy” b/w “Shine the Light” (produced by Thomas Jefferson Kaye) – plus two final promo 7-inch releases for the US market, “Shine the Light” and Duane Allman tribute, “I Got to Ramble” in 1974.  This would appear to be the extent of Link Wray’s Polydor singles discography (while also rectifying a *misstatement in my previous Link Wray piece that Wray’s years with Polydor “yielded no singles”). 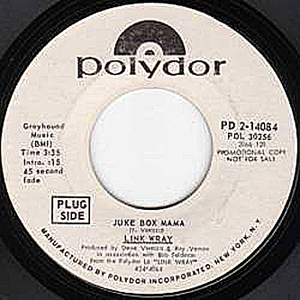 Only the catalog record for the Netherlands release of 1974’s The Link Wray Rumble, curiously enough, supplied information about the location of this album’s recording:  “Recorded at Wally Heider Recording & Funky Features, San Francisco, February 1974.”

Of all the goofy stunts in popular music, the decision to issue the debut album by         Hour Glass with the cover photo upside down certainly has to rank among the nuttiest. 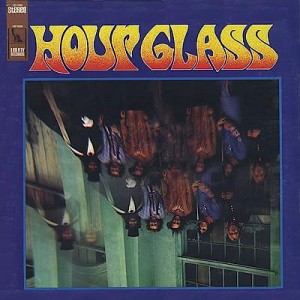 Gregg Allman, curiously, doesn’t mention it in his 2012 autobiography, My Cross to Bear, but he does talk a little bit about the song selection process for his and Duane’s first major label album that was released in 1967 on Liberty Records:

“When it came time to record that first Hour Glass record, (producer) Dallas Smith came to us with a washtub full of not cassettes but acetates.  One of them was signed by Carole King, and I’ve still got it.  It’s called “No Easy Way Down,” and we recorded that, along with another one of her songs, “So Much Love.”  They handed us that basket of songs and said, ‘Okay, now pick out your album.’  I couldn’t believe it, and neither could Sandlin (future Muscles Shoals house drummer, Johnny Sandlin).”

Even though Gregg ended up being the only band member who was allowed to contribute an original song on the debut Hour Glass album, as it turned out, not every single song was given to them sight unseen.  The fourth track on side one – “Cast Off All My Fears” – was written by then-unknown songwriter, Jackson Browne, a good friend of the band:

“I met Jackson through Jimmie Fadden who was the harp player for the Nitty Gritty Dirt Band.  Jackson had actually been a member of the Dirt Band in their early days.  He would crash at my place from time to time, because he was too proud to go back to his parents’ house in Long Beach.  Jackson knew he wasn’t going to do anything else but write songs and play music.  He’s a hell of a nice guy, incredibly funny, incredibly sarcastic, and him and my brother really hit it off — he was absolutely flabbergasted by Duane’s playing.  Jackson was our kind of folk, a person that I just liked being around.

“I watched Jackson write a lot of stuff, and I mean slave over it.  He was so deeply into it that he didn’t know I was in the room.  Every now and then, he would crawl off with that guitar and you would hear some beautiful melodies coming from the bedroom.  He would come over quite often, and he’d tell you that he was starting to get a little too bluegrassy, a little too country, and we brought him out of that.  We took him on some gigs with us from time to time, but of course, none of us were known at this point.  Jackson Browne was just this guy named Jackson Browne — he was just another musician.”

Interesting to learn that Canned Heat’s big 1968 hit “Goin’ Up the Country” is basically a re-write of 1929’s “Bull Doze Blues” by Henry Thomas, down to the flute part (listen here). The next year, 1969, saw the single release of a spirited cover version by The Duck (Johnny Sandlin) and The Bear (Eddie Hinton) of the Muscle Shoals Sound Rhythm Section, with help from Duane Allman and the Memphis Horns.  I like how the intro fools you into thinking that the song is heading in one direction before it shift gears and heads somewhere else altogether:

Did Atlantic really intend the title of the track to be “Goin’ Up to Country”? 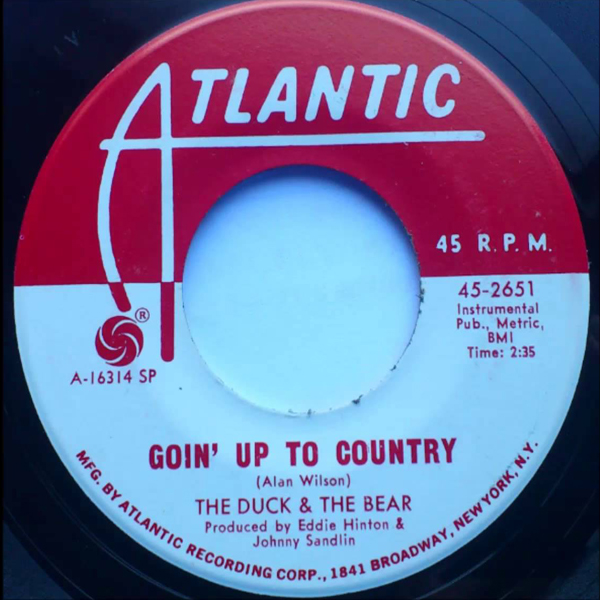