“There is an argument that it was all downhill for recording when music stopped being cut straight to disc.”

Ace Records UK has a catalog of reissues that is both all over the map and right out of this world.  I am hardly the first person to be knocked out by the amount of attention and care Ace lavishes on its subjects, one of them being the King Records musical legacy.  Ace’s website, unsurprisingly, documents the company’s journey in meticulous chronological fashion.  1993, for instance, would find Ace gaining the confidence and trust of IMG/Gusto, owner of the King master recordings:

Originally stationed in Cincinnati, Syd Nathan’s immense King Records was, by the 90s, located at Gusto Records in Nashville.  We had licensed the Scepter/Wand and Musicor labels owned by the same company for some time.  We finally got to access the well-organised King vaults and what a wonder they were.  Pretty soon, the Delmore Bros where rubbing shoulders with Freddie King, Wynonie Harris shouted the blues at Moon Mullican:  great sounding records from well-preserved tapes.  Some years later, we shipped the original 16” acetates that contained the first recordings to our studio.  We have been transferring them to digital ever since, releasing many previously unheard performances in pristine sound.  There is an argument that it was all downhill for recording when music stopped being cut straight to disc.

In the wake of some intense tape research and unearthing original 16” acetates in Nashville, the King label was our big thing of the year.  Before recording on tape, music was cut directly to large discs which were then copied, processed and used to make commercial 78s.  These acetates are a remarkable archive.  In those 16” grooves are many previously unheard recordings.  Also, those that were released were often drenched in reverb.  Our first two releases from this source were a pair of contrasting sets, one with six new performances from the Delmore Brothers, and one with seven previously unissued sides by Roy Brown.

Ace UK’s Tony Rounce would serve as fly-on-the-wall reporter to document the effort – this information reprinted with the understanding that Zero to 180 readers will seek out and purchase these quality King reissues from an honest-to-goodness music store:

As all R&B fans will know, Ace has long reaped the benefits of its ongoing access to the King Records catalogue, thanks in no small way to the cordial relationship we enjoy with the catalogue’s owner, Mr. Moe Lytle, his international representative Stephen Hawkins and the excellent, hard working team at King’s Nashville HQ.  Ace’s A&R team makes no secret of the fact that each of us loves multiple aspects of the King catalogue, and thus it’s never anything but sheer pleasure to be involved with the reissue of the company’s superlative recordings.

Through the kind auspices of Mr. Lytle, Ace’s A&R team has, or the past couple of years, been privileged to receive the ‘run of the vault’, during what has now become annual two-week trips to Nashville.  Under the supervision of Ace’s MD Roger Armstrong a team of the company’s senior A&R guys has been permitted to access the entire King tape inventory, and to copy as much repertoire to DAT as can be copied in the time we have available to us.  Happily for us, the friendly folk at King are more than amenable to putting in a few extra hours here and there to enable us to start early, and leave late, each day in our attempts to bring you as many quality reissues as we can assemble from two weeks worth of heads-down, no-nonsense copying.  It’s a win-win situation for everyone concerned, on both sides of the pond.

King’s formidable and extremely well-organised tape vault is complemented by a well-preserved collection of mint ‘library copy’ 45s and 78s, which between them contain a copy of virtually every record ever released on King, or one of its subsidiaries.  If this information is not itself enough to make most long-time R&B and soul collectors go weak at the knees, the knowledge that many of those vinyl and shellac masterpieces are blank label test pressings, with the label copy written in King founder Syd Nathan‘s own meticulous hand, will surely have most collectors reaching for the nearest comfy chair, while simultaneously clutching a bottle of maximum-strength smelling salts.

But that, as they say, is definitely not all, folks.  Until very recently, the King vaults also contained most of that company’s original acetates, cut between 1944 and 1951 (Syd, like many other indie operatives, did not initially trust the longevity of tape, and he insisted on cutting acetate ‘safeties’ until such times as the durability of oxide could be fully confirmed), and it also included a copious quantity of acetates from those labels King acquired along the way, such as De Luxe.  Most of the acetates had been in storage since Mr. Lytle’s Gusto Records purchased King in the mid 1970s, and most of them were in the same immaculate condition that they had been when they were first cut, over 50 years ago.

Those who are worrying about the use of the past tense here will be glad to know that it’s being used for a very good reason.  The acetates were in the King vaults, until very recently.  However, and as this piece is being written, those same acetates are now on their way from Nashville to Ace Towers, where each and every note of music they contain will be copied, downstairs at Sound Mastering Ltd over the course of the next year, to produce an unprecedented series of Ace CDs which will aim to present this historic and hugely important catalogue’s early masters as they have never been heard before (and, in many case, as they have never been heard, period!)

Ace had been discussing the possibility of undertaking such a task with Mr. Lytle and his team for some considerable time, so it goes without saying that we were all beside ourselves with happiness when permission was given for us to undertake the formidable task of decanting several hundred crumbling 25-count boxes of acetates into bigger and sturdier ones, for safe shipment from there to here.  My Ace colleague Alec Palao and I had the arduous, but ultimately very rewarding, task of packing over 60 boxes, each containing at least 60-80 acetates.  This might sound like a chore to some but, as we opened each box and steadily annotated the packing list, we were as excited as a couple of alcoholics with a month-long lock-in at their favourite neighbourhood bar.  It took us the best part of a week to work our way through the lot, but we couldn’t have been happier with the end result.

An incredible number of acetates have survived the passage of time and, in most cases, in a condition that could only be described as “Mint Minus”.  Unfortunately, a few of the earliest acetates were glass-based, and several of them had broken somewhere along the line, including, sad to say, some unique items that will now never be heard in anything other than ‘from 78’ quality.  However, the vast majority of the acetates were and are metal-based – so no fear of breakages there, although a few had corroded beyond salvation.  On the whole, though, the condition of these unique sound sources was, and is, superb, and the quality of the CDs that Ace will be able to produce from them ought to be nothing less than phenomenal.

As the chief ‘acetate-sorter-outer’, it fell to me to decide which slates to ship where there were multiple copies of the same one, thus I got to see every acetate as it moved from box to box.  I need not explain to any collectors how much of a thrill this was, as the original acetates for Wynonie Harris‘ “Good Rockin’ Tonight”, Cowboy Copas‘ “Filipino Baby” and just about all of Hank Penny‘s first session for King flashed before my eyes, en route from a small carton to a packing box.  Even more thrilling was the discovery that, contrary to long-held beliefs in the blues community, early De Luxe acetates that were believed to have been lost in a warehouse fire in 1948 mostly had not been.  At least one take of most of the multitude of unissued and unheard Roy Brown sides were present and correct, as were other potential delights from legendary New Orleans names like Smiley Lewis, Eddie Gorman, Annie Laurie, Paul Gayten, Chubby Newsome & Dave Bartholomew.  If this is not exciting news, then I’ll eat both my hat AND yours.

From a personal point of view, coming upon the original acetates for King 501 (Bob McCarthy a.k.a. Merle Travis‘ “When Mussolini Laid His Pistol Down” [1943 – audio unavailable on YouTube] was a thrill and a half, as was locating the acetate containing several takes of the Travis/Hank Penny western swing classic “Merle’s Buck Dance”.  Who among us could not have been delighted to find out that the unissued Roy Brown‘s were alive and well, or that the likes of Homer and Jethro, John Lee Hooker, and the early Delmore Brothers/Wayne Raney sides would soon be heard a quality comparable to that in which they were originally recorded.  Certainly not anyone who works at Ace, that’s for sure.

The acetate reissue programme will not happen overnight, of course.  Much prioritising has to be done, followed by much transferring.  But we at Ace hope that we will have the first releases in the special ‘acetate’ series on the market by late spring of 2005.  Once the first titles are out we will be issuing further packages throughout 2005 and 2006 and, well, effectively until we run out of acetates to reissue, really.  In general, the release of these packages should forever do away with anyone’s need to buy any more unauthorised Out Of Copyright issues of King material from this era, which can only be a very good thing, really.

Of course, we will not be neglecting our programme of “from tape” King reissues, either.  While we were ‘on site’ in Nashville we also transferred enough sides, from original mastertapes, to extend our King programme well into 2006, even without the ‘acetate series’.  The first fruits of this side of our labours will be available in January, with the first-ever legal reissue of The Lamplighters‘ great Federal catalogue in superlative sound, followed by a ‘5‘ Royales package that obviously includes the hits but that focuses its attentions mostly on those King sides which have been reissued less often or not at all.  As 2006 unfolds there will be a second volume of King Rock ‘n’ Roll, two more volumes (at least!) of King Doo Wop [four volumes in all], the complete recordings of Dominoes/Drifters-affiliated group The Checkers, a package of the early recordings of The Royals/Midnighters, a second volume of Little Willie John [sets one and two] and much more besides.  As Roger A. made the majority of the tape transfers for these packages, the guarantee that these will sound better than any other reissue of this material comes straight from the top!

Here at Ace, King will always be King, and we’re firmly committed to continuing to send it victorious, happy and glorious, long to reign over all vintage R&B and Hillbilly aficionados.  Long live the King! 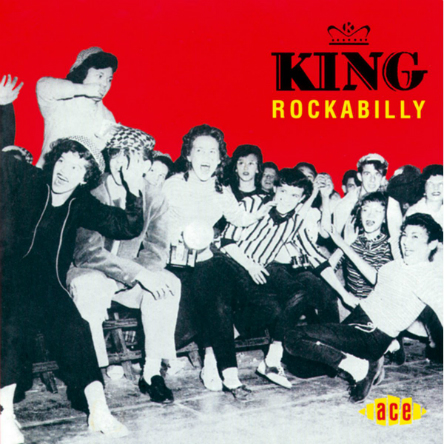 Various Artists:  Welcome to the Club [Chicago blues on Federal]

Brother Claude Ely:  Satan Get Back!

Trini Lopez:  Sinner Not a Saint

Stick McGhee:  And His Spo-Dee-O-Dee Buddies

The Royals/Midnighters:  The Federal Singles