Today’s piece is inspired by (i.e., lifted from) a special Top 40 list of 7-inch vinyl compiled by 45Cat contributor, stereotom.  These (literally) defining songs — whose titles all begin with the phrase “What Is a [blank]” — have been organized chronologically and married with streaming audio where possible (click on song titles).  Was just about ready to post this piece when I stumbled on the fact that a key Johnny Cash tune was missing from this list.  Any others?

“What Is a Baby?” by Peggy Lee [from Walt Disney’s Lady and the Tramp]

“What Is a Skunk?” [flip side of “Seventeen Tons“] by Sammy Shore

“What Is a Wife?” by Steve Allen b/w “What Is a Husband?” by Jayne Meadows 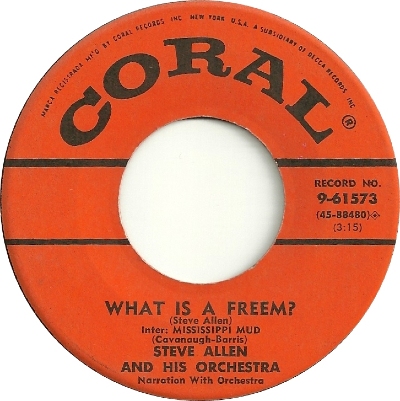 “What Is a Waitress?” [b/w “Honest John Grabmore“] by Sir Cedric Fat-Wallett II

“What Is a Teenager?” b/w “What Is a Disc Jockey?” by Jim Ameche

“What Is a Skiffler?” [b/w “The Tommy Rot Story“] by Morris and Mitch

“What Is a Baby?” — Narrated by Rosemary Clooney

“What Is a Boyfriend?” [b/w “All About Girls and Women“] by Tom Edwards

“What Is a Mother?” by James Condon

“What Is an Indian?” [b/w “Telephone Operator“] by Dal Williams

“What Is a Wife?” by The Voice of Mahon (John Mahon)

“What Is a Rugby Supporter?” by John Pike [b/w “The Rugged Rugby-Playing Trail“
by The Rugbymen With The Half-Timers]

“In the early to mid-1960s, Westport radio station 3YZ was a home of broadcasting talent.  Reon Murtha, Lloyd Scott, Peter Sinclair, Bill Toft, Ian Watkin, Bob Sutton, Warwick Burke and John Pike were just some of the announcers who either started or built their careers there.  A good broadcasting team is only as good as its technical support and writers.  3YZ was lucky to have the witty producer/writer Alwyn (Hop) Owen on staff (he later founded the long-running RNZ Spectrum series).  In 1960 Owen and station announcer Pike recorded ‘What is a Rugby Supporter?’ – a spoken monologue reminiscent of the newsreel shorts shown in cinemas before the main feature.  Calling themselves The Rugbymen (with the Halftimers), it was released on Kiwi, backed with ‘The Rugged Rugby Playing Trail’.”

“What Is a Grandmother?” by Paul Randal

“What Is a Daddy?” by Jeff Price

What Is a Disc Jockey?” [B-side of “A Disc Jockey’s Christmas Eve“]
by Herb Dodson

“What Is a Santa Claus?” [b/w “O Tannenbaum“] by Stan Kenton
[with the Ralph Carmichael Choir]

“What Is a Fisherman?” b/w “What Is a Quail Hunter?” by Robert Fuller

“What Is an American?” by Arthur ‘Guitar Boogie‘ Smith

“What Is a Truck Driver?” [b/w “Rainbow Road“] by Ralph Emery

“What Is a Jew” by Alex Dreier

“What Is An American” [b/w “Psychoanalysis“]

“What Is Truth” by Johnny Cash

“What Is Youth” [b/w “Tennessee Bird Talk“] by Ben Colder

Youth are my friends youth and youth but not himth

“What Is a Cajun?” [b/w “Tee-Boy Made The Opry (The Cajun Country Star)”
by Happy Fats (The Cajun Storyteller)