In the early part of this century, reissue label, Hip-O, put out a comprehensive series of James Brown single releases that were issued from 1956-1981.  Historians & researchers will no doubt be studying these liner notes in decades to come as they try to organize and make sense of the James Brown legacy, particularly given the volume of recordings issued over the course of his lifetime.

One thing I discovered by simply looking at the musician credits:  those bongo drums sound unusual on “Let Yourself Go,” because bongos – believe it or not – were not part of JB’s pioneering percussion sound, generally speaking.  According to the musician credits in this singles series that someone kindly posted on the Discogs website, I only see a handful of recordings (five by my count) between the years 1966-1973 that include the bongos.

Thanks to the missus, I am fortunate to own the 2-volume reference set, The King Labels:  A Discography as compiled by Michel Ruppli.  And yet I am discovering time and again that Ruppli’s discography is not authoritative as I had originally assumed.  Thank goodness, therefore, for the input of other music fanatics and actual participants who were there when history took place.  For example, if I simply relied on Ruppli, I might have continued to labor under the delusion that the Famous Flames backed James Brown on another great single from 1967 when, in fact, it was The Dapps. 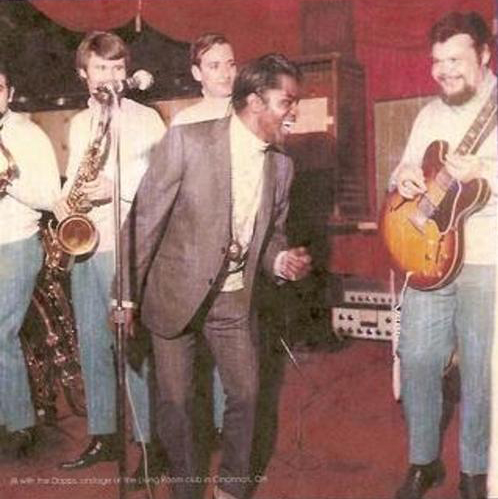 My appreciation to Mitch Bowman, thus, for pointing me to James Brown’s “Funky Soul #1″ b/w “The Soul of JB” 45 originally released on King.  Ruppli tells me that the A-side was recorded on August 17, 1967 in Cincinnati but has very scant information about its mate.  Moreover, the B-side is attributed (wrongly) to “James Brown and the Famous Flames” and adds (incorrectly) “probably band without James Brown.”  That’s about it for the historical details – only the year is listed, no musician credits – although Ruppli does add, intriguingly, that another composition of “unknown title” was recorded but remains (to this day?) unissued.

Thanks to James Brown – The Singles, Volume 5 (1967-1969) for affirming Bowman’s assertion that his brother-in-law, Les Asch, and his fellow Dapps were the musicians who backed James Brown on this double A-side instrumental excursion.  Gather around everybody for a musical fight, and hear for yourself as the organist and saxophonist duke it out on their respective instruments:

If I were in the producer’s chair (I see you rolling your eyes), I would have followed James Brown organ solo in the left speaker with Pee Wee Ellis’s alto sax solo in the right speaker in order to underscore the dueling aspects of this musical match.  As it stands, both solos erupt from the west.  Note, too, the writing credits that include Gladys Knochelman – would love to know her role in the creative process, as her name appears ever so infrequently in the epic story of James Brown.**

There’s no denying the global impact of the fresh funk created by James Brown and his various support players over the years, much of which was recorded in Cincinnati — note the impact felt as far away as Japan, as this web tribute to JB attests.  Hey, check out some of the prices that Dapps singles command on Ebay.

Don’t believe the hype:  The Dapps are the backing band here 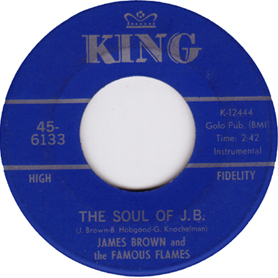 Biff!  Bam!  Pow!  This is the thirteenth bout tagged as a Musical Fight

Tony Oulahan would subsequently contact Zero to 180 to shed light on this piece’s playful reference to Gladys Knochelman‘s artistic contribution to “The Soul of JB”:

“So my grandmother was Syd Nathan’s assistant for most of her time at King records.  She also was a copywriter at one point as well.  She died close to 20 years ago.  She had close relationships with James, his band and many of the other artists at King.  She had a couple of engraved jewelry pieces that James gave to her.  I wish I could say otherwise, but she had nothing to do with the creative process on the album.  And from what I know it wasn’t James directly that gave her the credit.  She loaned someone in his group some money and they couldn’t pay her back.  They gave her this credit in lieu of payment.  It could have been his manager or someone else in the band.  I’m almost positive that it wasn’t James himself, I can’t remember exactly who it was.”