Now that I no longer live in the Ohio Valley but the Sligo Creek Valley watershed (which drains into the Anacostia, a tributary of the Potomac), I thought it would be interesting to search 45Cat’s singles database for any songs with the word “Sligo” in the title.  Surprise! That elite aggregation of top Nashville studio musicians – Area Code 615 – put out a peppy instrumental 45 in 1973 on Polydor whose song title contains but a single word, “Sligo”:

Tune written by Kenny Buttrey (stalwart drummer, who left us this past September) and  Wayne Moss (whose immaculate rapid-fire guitar work on Bob Dylan’s “I Want You” is a great starting point for this guitarist). 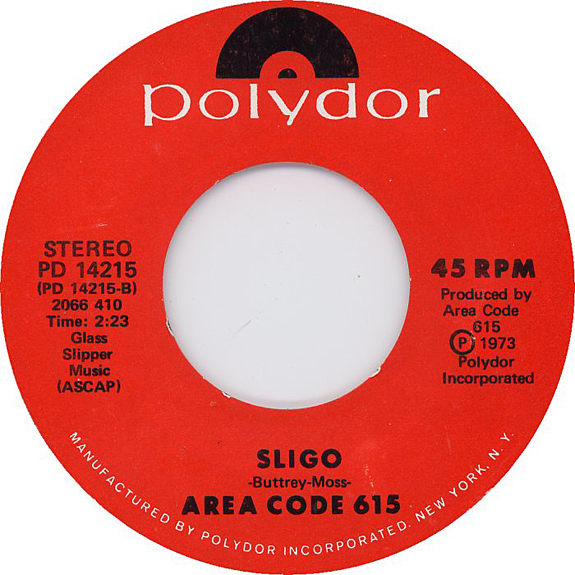 Brief excerpt from a 2002 interview with Wayne Moss:

What was the difference between the two bands you were both in, Area Code 615 and Barefoot Jerry?  Both were made up of studio musicians, were they not?

Area Code 615 was basically an instrumental band.  A lot of the membership was the same.  Charlie McCoy was in both bands.  Kenneth Buttrey was drummer in both bands. Myself [Wayne Moss] and Mac Gayden.  All three of the others went on to better and bigger things. Mac Gayden wrote a lot of terrific songs like “Everlasting Love.”  Charlie McCoy was musical director for [TV’s] Hee Haw for twenty-some years and he plays for six different labels right now (as a session musician).  So, we had to replace those people with other folks and in the process of that we ended up with 25 different people in the band.  Dave Doran played with Moby Grape.  Bobby Thompson played banjo on a lot of the Hee Haw shows. Buddy Spicher went on to be musical director of the Crook and Chase show.  There were a lot of good people in and out of the band. Terry Dearmore is now a Unity preacher in Virginia.  John Harris is deceased; he was our original keyboardist.  Guitarist Jimmy Colvard also passed away in the seventies.  Our group made records from 1970-71 to 1976.