It must have been the year before last when I was enjoying a madcap musical romp through Thailand and its wildly imaginative bootleg EP scene — 7-inch picture sleeves using filched images, with four songs often (but not always) by four different artists, produced in renegade fashion without regard for legal or copyright considerations [see “Oddball Beatles EPs Worldwide“].  It was early 2018, most likely, when I made that fateful decision to print out a decent quality scan of a bootleg EP that had made the curious call to bring together the bubblegum sounds of The Archies and 1910 Fruitgum Co. (plus early Dave Clark Five) with “agit-pop” from The Rolling Stones, “Street Fighting Man” — a song that was banned from radio (and whose provocative sleeve was immediately withdrawn) in 1968, a year in which assassination and rioting dominated headlines. 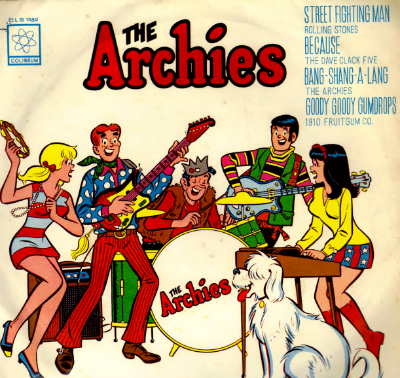 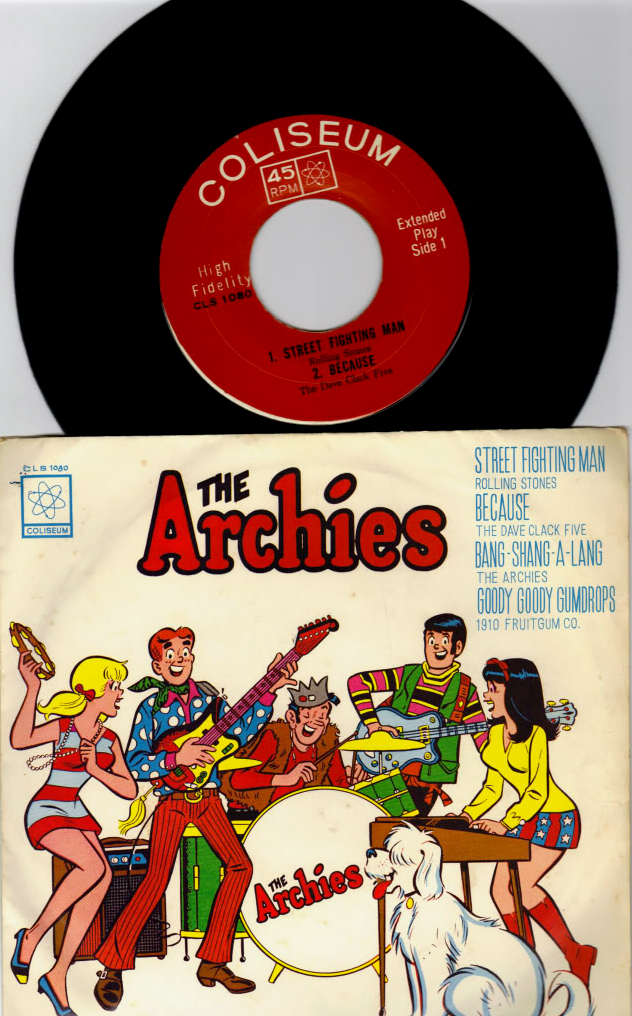 Don’t recall why I printed out this image in the first place, but the weird part is that this printout ended up at the top of my “scratch paper” pile, and I began to use the back of it for correspondence, when the librarian in me prompted me to search the 45Cat database to affirm its existence but could no longer find it there … or anywhere else on the Internet!  This scanned image, therefore, is the world’s only proof * of a bootleg EP from Thailand that was almost certainly released in 1968, possibly 1969.

Did I somehow dream up this EP release – Coliseum CLS 1080 – or was it, in fact, actually birthed?  45Cat allows users to easily browse a list of cataloged Coliseum releases, which has entries for two somewhat nearby catalog numbers, CLS 1087 (from 1969, we think) and CLS 1099 (released 1968, confusingly). 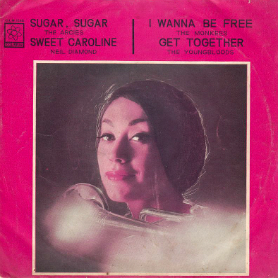 Evidence of Coliseum CLS 1080 EP’s existence:  If you Google the terms Coliseum + Archies + “CLS 1080” (as of October 10, 2019), Bill Rousell‘s music sales website will turn up in the search results, with a sales listing for this EP that names the four tracks in identical order.

Zero to 180, you might recall, had previously saluted The Archies five years ago in a piece that acknowledged 1968 to be a remarkably fertile time for truck driving country music.  The Rolling Stones (not to mention Stones sound-alike bands) have also been the focus of Zero to 180’s roving eye more than once over the years. 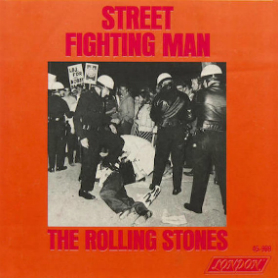 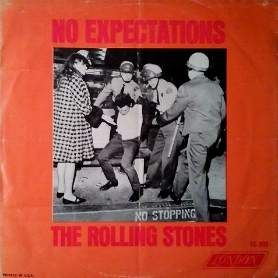 If the example of Thailand suits your warped sensibilities, you will also likely enjoy browsing the unauthorized vinyl output from the countries of Malaysia, Iran & USSR. 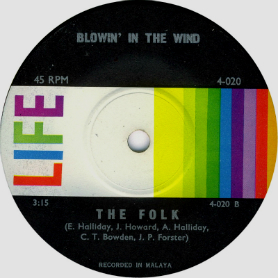 Furthermore, if you poke around 45Cat’s database in the section tagged as “Poland,” you will quickly discover a vast underworld of “postcard discs” — sometimes plain, but often as not, “old-timey” renderings and travel scenes, as well as modernist art images, with one and sometimes two songs on a single-sided “sound postcard”! 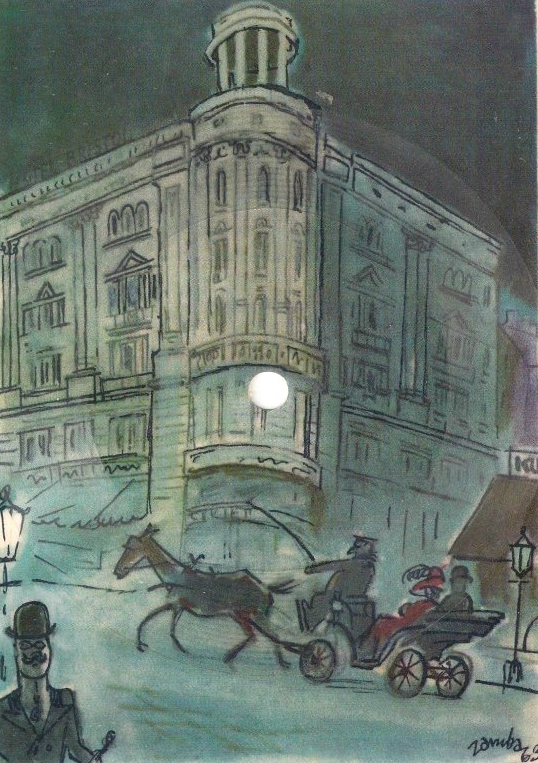 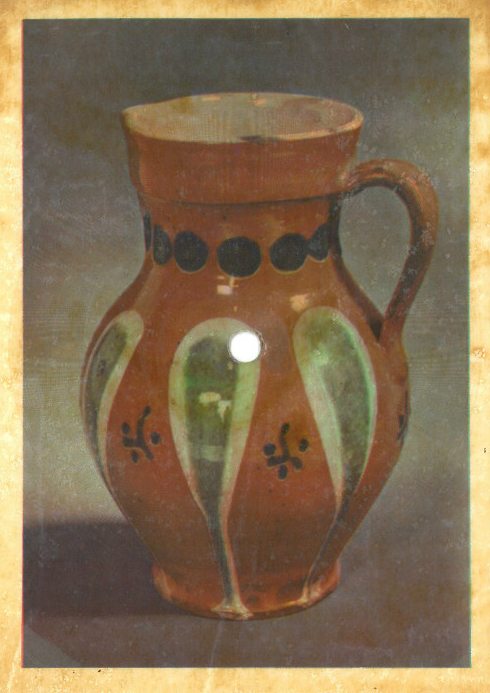 Isn’t it obvious?  “Apache” by The Shadows = Polish postcard disc

*Note:  The comment attached to this piece from “Smack” (received ten minutes before midnight on Halloween 2020!) means that this 1968 Archies EP release from Thailand – Coliseum CLS 1080 – is now, once again, back in the 45Cat database, thus making this Zero to 180 piece obsolete.

“Sugar Sugar” was inescapable in the summer of 1969, with Wilson Pickett and even The Wailers (with Bob Marley singing lead) recording their own versions.  Muscling in on the action also were the studio musicians behind the hits being recorded in the late 60s at Rick Hall’s Fame Studios in Muscle Shoals, Alabama – The Fame Gang – who put together a (near) instrumental version for their lone LP, Solid Gold from Muscle Shoals:

[Pssst:  Click the triangle above to play “Sugar Sugar” by The Fame Gang.] 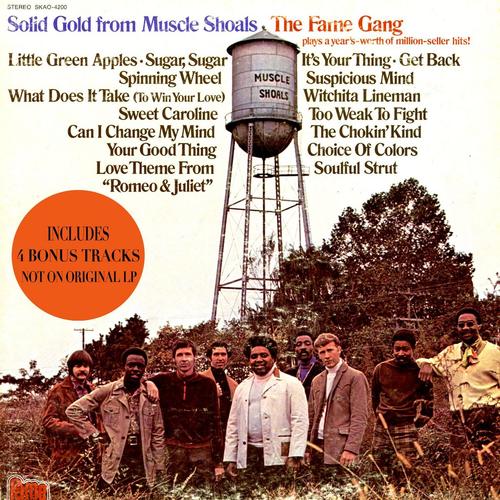 That’s right, as the sticker indicates, there is an “expanded” version of this 1969 album that includes four additional tracks:  “Soul Feud”; “Grits and Gravy“; “Twangin’ My Thang”; and “Turn the Chicken Loose.”   Two of these non-LP tracks — “Soul Feud” backed with  “Grits and Gravy” — were issued as a 45 in August 1969 on the Fame label. 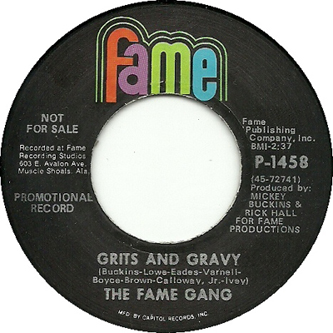 The Fame Gang, as it turns out, were the third “rhythm section” in Fame Studio’s long and illustrious history.  It was Arthur Alexander’s big 1961 hit, “You Better Move On,” that earned enough money to finance the building of Fame’s bricks-and-mortar studio, where Rick Hall assembled his first full-time session players, a group that included Norbert Putnam, Spooner Oldham, Terry Thompson, and David Briggs, among others.  The next rhythm section, easily the most renowned of the four, comprised Jimmy Johnson, David Hood, Roger Hawkins, Barry Beckett, and Junior Lowe (and sometimes Duane Allman) and was the backing group for Aretha Franklin on her groundbreaking “I Never Loved a Man” session in 1967.  However, on March 20, 1969, Johnson, Hood, Beckett, and Hawkins formally announced to Rick Hall their intention to open the Muscle Shoals Sound Studio in nearby Sheffield.  Hall immediately assembled another top-flight team of talent and then – coincidentally or not – allowed them to put out this full-length release.  More history on the Fame Studio rhythm section musicians can be found at this link.

1968 was a great year for truck driving songs:  “Big Rig Rolling Man” by Johnny Dollar,   “My Big Truck Driving Man” by Kitty Wells, “Gear Bustin’ Sort of Feller” by Bobby Braddock, “There Ain’t No Easy Run” by Dave Dudley, “I Want to Be a Truck Driver’s Sweetheart” by Marcie Dickerson, “The Truck Drivin’ Cat with Nine Wives” by Jim Nesbitt, “Somebody Stole My Rig” by Shel Silverstein … and “Truck Driver” by The Archies:

Written by legendary songwriter and Archies mastermind, Jeff Barry, “Truck Driver” was the B-side to “Bang-Shang-a-Lang” – The Archies’ debut 45 released in the US, UK, Canada, Australia, South Africa and Rhodesia (with “I’m in Love” replacing “Truck Driver” in Spain). 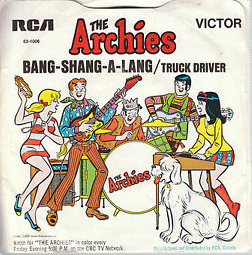 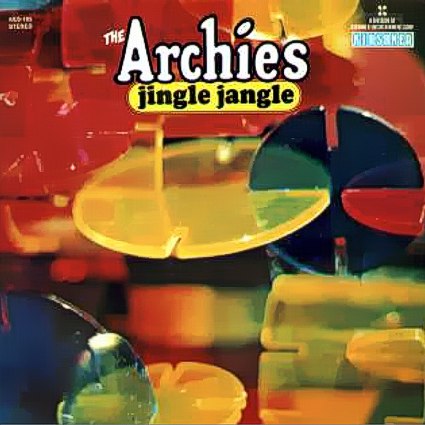 “It’s sunshine, love – the sparkle of young, spirited voices creating clean, pure fun with their music.  The comic-strip American characters, creations of John L. Goldwater, are bright, happy teen-agers and always have been.  As American as baseball, as popular on the international scene as jet travel and still as uncomplicated as a frisky puppy.  The Archies build up with good nature rather than tearing down with bitterness and disillusionment….

This has been the year of the Astronauts landing on the moon, the Mets, and the Archies.  Not only are all three sensational but each one holds a promise of more to come.  Have fun with the Archies.  Delight in the Jingle Jangle of their sound.”

Liner notes from back cover