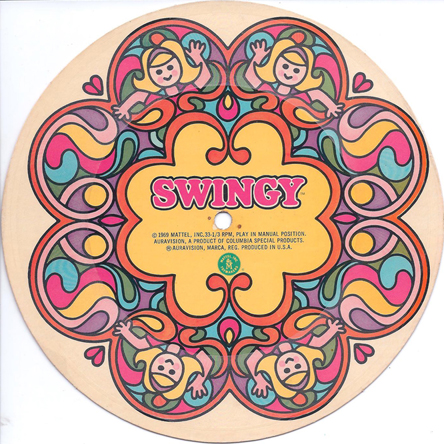 I picked up a flexi-disc at the local thrift store, just like the ones kids used to cut out of the back of cereal boxes back when “Sugar Sugar” by the Archies was burning up the charts (click here for a discography of “cereal box records” by those tireless scholars at Bubblegum University).  Except this flexi-disc came pre-cut.  And it likely was among the first pop recordings to be included as part of the packaging of a baby doll – in this case, Mattel’s head-swiveling life of the party, Swingy  [TV ad].

Not a bad tune for bubblegum, I have to admit, and it features some nifty 12-string fingerpicking in the bridge.  But for some unfathomable reason, the song nearly clocks in at 5 minutes – twice the length it should have been.  Fortunately, I have mixed a 2:15 version of this recording that better suits the attention span of the desired demographic for this product:

[Note:  Click on the triangle above to play the “Swingy” flexi-disc recording.]

But wait – there’s more to the story.  “Swingy,” the song, as one astute YouTube observer points out, is a faithful remake of Paul Revere & the Raiders’ “Mr. Sun Mr. Moon” (#18 pop hit in March 1969) on Columbia – albeit with a new lyrical concept.  No wonder the flexi-disc says “Columbia Special Products” on the label:  CBS Records creatively leveraging its musical assets to tap new markets – i.e., preschool rockers.