How humorous to browse a chronological listing of Waylon Jennings albums starting in 1964 – eleven on RCA by my count, following his debut LP At JD’s – when out of nowhere, A&M suddenly decides to issue its first and only album by Jennings, long after his brief run of singles (1963-65) with the label.  Jenning’s country (folk) rock take on Bob Dylan’s “I Don’t Believe You” — originally recorded January 4, 1965 at Phoenix’s Audio Recorders would enjoy release that year as the B-side for “The Real House of the Rising Sun“:

Is it possible that Jennings’s March 25, 1970 appearance on ABC’s wildly successful Johnny Cash Show is what prompted A&M that same year to make a renewed attempt to cash in on their mid-60s recordings of Waylon? 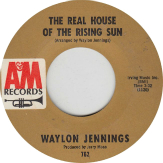 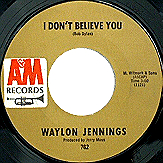 Jennings’ tenure with A&M amounted to four single releases released between the years 1963-65.  Don’t Think Twice — Waylon’s only LP on A&M — would be issued in the US and UK in 1970, four years into his 20-year run with RCA. 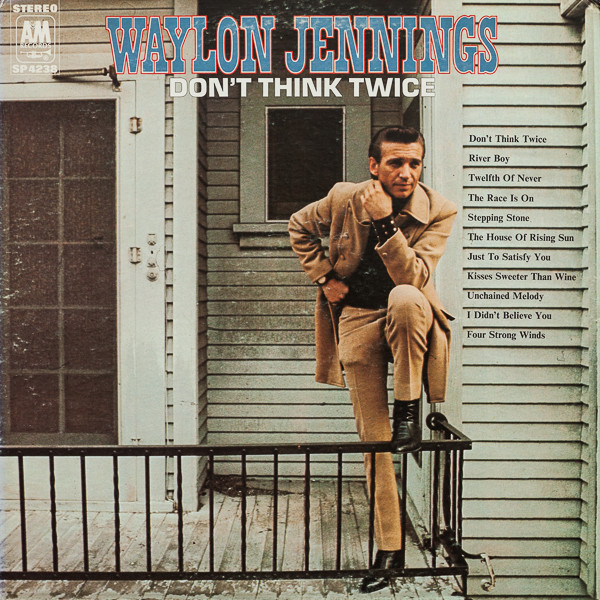 Examine the album cover above carefully and note that A&M couldn’t even be bothered to transcribe the song title correctly:  “I Didn’t Believe You”!

Jennings, you might recall (though likely not), was the subject of an early Zero to 180 piece that featured his unusually bass-centric take on Bob Gibson’s “Abilene.”

John Hartford‘s strings version of Dylan’s “One Too Many Mornings,” which kicks off the Jud soundtrack LP:  Is it true, as the person who posted this YouTube video states, that this 45 was “never released”?

As the one commenter on this YouTube clip insists:  Please correct “To” to “Too”

[Al Perkins, not to be confused with Muscle Shoals guitarist, Wayne Perkins, who was enlisted by the Chris Blackwell Organisation to help “sweeten up” three of the tracks on the 1973 debut album by Jamaica’s top vocal trio, the original Wailers (recently profiled) backed by the Barrett brothers, et al.].

As it turns out, Hartford “doesn’t seem to play a lick, actually” on “One Too Many Mornings,” cheekily observes YouTube contributor been there. 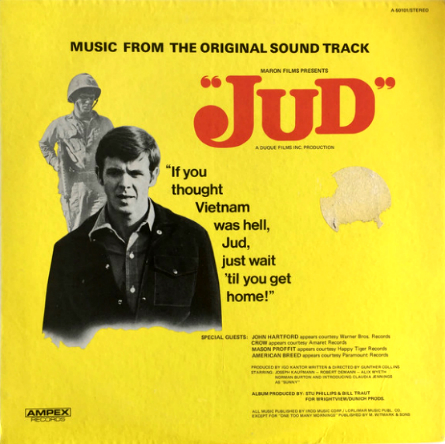 Billboard, in its May 29, 1971 edition, would praise this “folk rhythm ballad” as part of its “Special Merit Spotlight” that features “new singles deserving special attention of programmers and dealers” (opposite a full-page promotional ad for Karen Dalton’s album, In My Own Time):

From the soundtrack of the film ‘Jud,’ Hartford has a strong commercial reading of the Bob Dylan folk rhythm ballad with much chart potential. 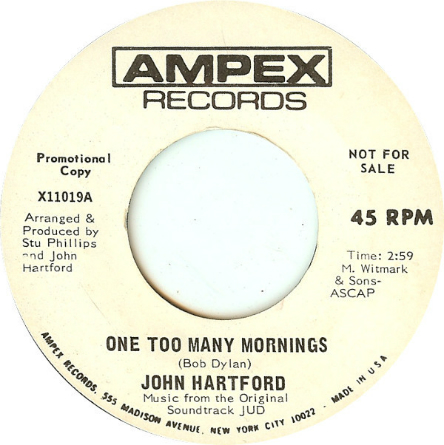 Ampex did issue a promotional/DJ 45, but alas, there appears to have been no single release for the Hartford-sung/Phillips-arranged “One Too Many Mornings” in the US …  However, further probing of Discogs reveals that Ampex apparently green-lighted a single release in Canada!

Reading Between the Grooves points out this unintended bit of hilarity about the (non) single’s flip side:

The single featuring Hartford didn’t even list an artist for its flip of “Solitary Sanctuary,” which was actually performed by Alan Brackett, John Merrill, and Barbara Robinson.  Another version of the same song was the last cut on the LP and was performed by the American Breed.

Whether you try to obtain this recording via the movie soundtrack or either of the Ampex 45s:  not an easy row to hoe.  But wait, good news:  “One Too Many Mornings” would end up, fittingly, as a final “bonus” track on 2003’s pairing of two Hartford albums — 1970’s Iron Mountain Depot and 1971’s previously unreleased Radio John — on one compact disc (that also comes with a DVD of a live studio performance of John Hartford and Iron Mountain Depot on February 24, 1970). 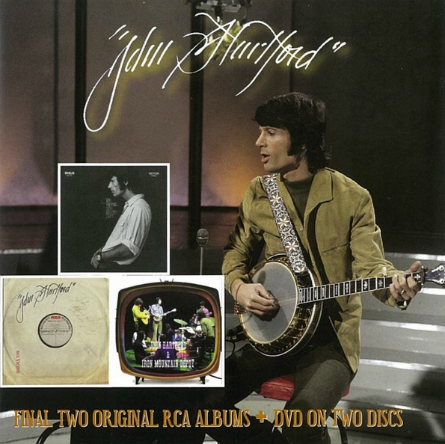 Bob Johnston – who famously produced Dylan‘s Highway 65 Revisited & Blonde on Blonde and Johnny Cash‘s Folsom Prison, among many other classic albums – left us last August.  How startling to discover that Johnston used Nashville’s finest session musicians in 1966 to record a “dazzling anti-masterpiece” (as notes AllMusic’s Mark Deming) that delighted in “punking” the pop radio hits of the day – a Columbia release with the comically bloated title, Moldy Goldies: Colonel Jubilation B. Johnston And His Mystic Knights Band And Street Singers Attack The Hits.

Sean Wilentz, in Bob Dylan in America, would deem it “one of the most obscure rock albums of the 1960s.”   Nashville Cream, in a 2012 interview with Johnston, would describe the album as, “superbly demented.”

And yet this album was released in 1966 – prior to Pepper!

Listen as Bob and the boys deconstruct Shirley Ellis’s “The Name Game” to hilarious effect (this will require, unfortunately, that you manually drag the “progress bar” all the way to the 25:35 point — very last song on the album).  Try not to laugh when Johnston starts to lose it:

I took a chance on Weird Al’s 11th album – 2003’s Poodle Hat – and had a good laugh when I realized that his send-up of Bob Dylan’s “Subterranean Homesick Blues” was palindromic from beginning to end:

At the time of the album’s release, MTV reported that Eminem gave permission for Weird Al’s “Lose Yourself” parody, “Couch Potato” – but not a video (unfortunately, already in pre-production).  Thus, Weird Al had to scramble to put together another video that,   luckily for us palindrome fans, ended up being a hilarious spoof of Bob Dylan’s iconic series of rapid-fire lyrical images that accompany “Subterranean Homesick Blues” from the Don’t Look Back documentary of Dylan’s 1965 UK tour. 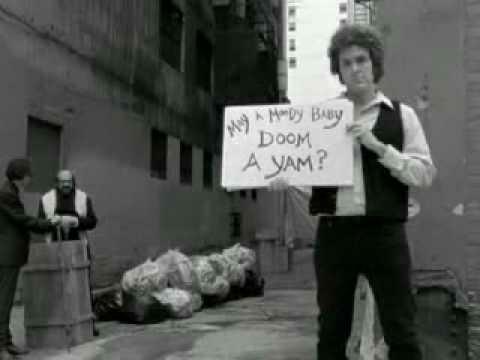 I, man, am regal – a German am I
Never odd or even
If I had a hi-fi
Madam, I’m Adam
Too hot to hoot
No lemons, no melon
Too bad I hid a boot
Lisa Bonet ate no basil
Warsaw was raw
Was it a car or a cat I saw?

Rise to vote, sir
Do geese see god?
“Do nine men interpret?” “Nine men,” I nod
Rats live on no evil star
Won’t lovers revolt now?
Race fast, safe car
Pa’s a sap
Ma is as selfless as I am
May a moody baby doom a yam?

Ah, Satan sees Natasha
No devil lived on
Lonely Tylenol
Not a banana baton
No “x” in “Nixon”
O, stone, be not so
O Geronimo, no minor ego
“Naomi,” I moan
“A Toyota’s a Toyota”
A dog, a panic in a pagoda

Oh no! Don Ho!
Nurse, I spy gypsies – run!
Senile felines
Now I see bees I won
UFO tofu
We panic in a pew
Oozy rat in a sanitary zoo
God! A red nugget! A fat egg under a dog!
Go hang a salami, I’m a lasagna hog 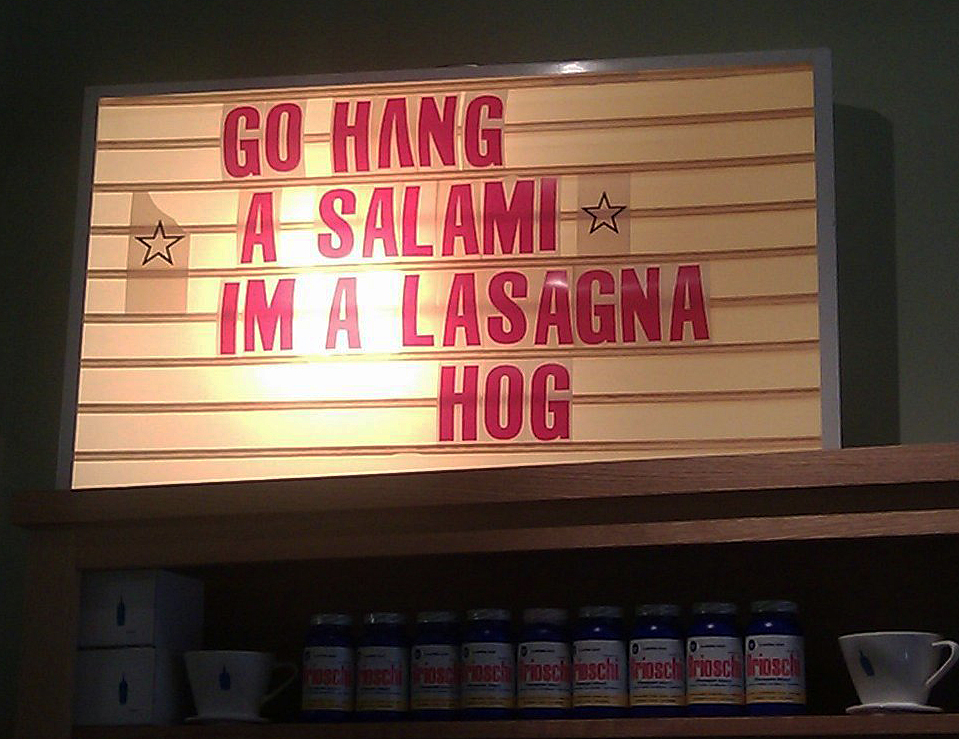