I’ve always appreciated how They Might Be Giants respect their fanbase and labor hard to provide high value for the entertainment dollar.  While their music has always had strong appeal to a younger demographic, in recent years They Might Be Giants have released albums aimed squarely at the school-age crowd, such as Here Comes the ABCs, (released as 25 tracks on CD, 39 on DVD) which has gotten a lot of airplay around our house.  Note the clever lyric and accompanying animation sequence for “Alphabet Lost and Found“:

There is a good reason why this YouTube clip was uploaded under the name of “DisneyMusic” — so says Wikipedia:

“While [the album] was produced and released by Walt Disney Records, the band was reportedly given complete creative control over the project, which at the time was very unusual for Walt Disney Records, which had until then followed a strict artist control policy.  As a result, the DVD features a variety of puppetry, animation and live action supplied by personal friends of the group, including A.J. Schnack, who directed the TMBG documentary Gigantic (A Tale of Two Johns).  For guest vocals on a few tracks, they turned to family:  John Flansburgh’s wife Robin Goldwasser, and John Linnell’s son, Henry.  The music videos that appear on the DVD were also aired (in part or whole) on the Disney Channel’s children’s programming block, Playhouse Disney.”

Sounds like Alvino Rey‘s “Sono-Vox” being employed in the phased backing vocals — or some simulation thereof, yes? 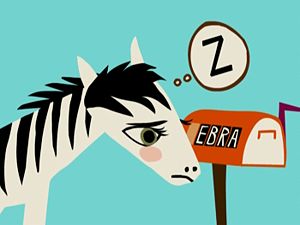 Divya Srinivasan is the artistic hand behind the animation on “Alphabet Lost and Found” — check out the rest of her work at her website, which includes an animation reel and illustration slide show.

Here Come the ABCs would be the successor to No!, their first formal children’s album.

For their April 1992 edition, Reflex Magazine would release a “split“ 331/3 RPM flexidisc:  XTC b/w TMBG!  Side A features “Rip Van Reuben” – a home demo of an Andy Partridge composition – with They Might Be Giants’s “Moving to the Sun” on the flip side.