The radical “double-tapping” guitar style pioneered by Michael Hedges and Stanley Jordan was a phenomenon I got to witness firsthand when a former musical sparring partner of mine went away to Boston’s Berklee School of Music and – like Robert Johnson and his famous pact at the crossroads – came back forever changed and, by 1988, exploding with talent in all directions, his music all-encompassing:  progressivefolkjazzrockgospelfunk.

I recall clearly how one particular composition – “Thunderfoote” – signaled a seriousness of intent that was startling to behold at the time and no less impressive today:

[Pssst: Click the triangle above to play “Thunderfoote” by Michael Avraham HaLevy]

It was more than a little dismaying to realize that Michael’s interest in “non-traditional” tunings meant never again would I be able to pick up one of his guitars and strum along.

I will always have especially fond feelings for Michael’s original four-track version with the double-tracked, double-tapped guitars, even though Michael would subsequently go into a “proper” studio and record an equally excellent full-band version of the song (the Michael Andrew Frank Band, as they were known) that features the work of Anders Bostrom (flutes), Maury Rosenberg (keyboards),  Dan Foote (drums/percussion), and Rich Lamb (synth bass), along with Michael’s own guitar & keyboard work.

Michael’s “The 11th Step” is another composition that was created during this especially fertile period when Michael lived in Boston and New York City:

As late as March, 1993, Michael could be heard/seen in New York City playing at places like the Cornelia Street Cafe (the same place where David Amram would hold musical court, I would learn later in John Strausbaugh’s excellent The Village:  400 Years of Beats and Bohemians, Radicals and Rogues — A History of Greenwich Village).

For the last 20 years or more, however, Michael has been living in Jerusalem in the Holy Land.

Q & A with the Artist

Q:  With regard to the original 4-track demo of “Thunderfoote,” did you regard that composition as a ‘breakthrough’ moment of sorts for you, artistically?
A:  No, that would mean the end of physical existence which is next to impossible while donning the earth suit.

Q:  Did the song come to you all at once – or was it something that manifested itself more slowly over time?  Somewhere in between (or neither)?
A:  Slowly, over the illusion of time.

Q:  How many guitar tracks did you lay down altogether on the original 4-track recording?
A:  2 Tracks

Q:  Any noteworthy stories associated with the studio recording of “Thunderfoote” you made with the Michael Andrew Band?
A:  Labor of love…

Q:  What do you treasure most?
A:  Jerusalem. 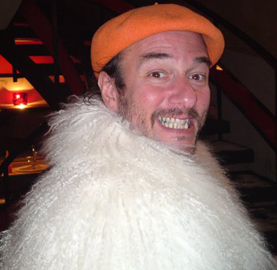 The life and workings of the body are governed by ten basic pulses. These in turn are vitalized by ten kinds of melody emanating from the soul. Negativity, anxiety and depression weaken the pulses, and this can cause illness. But when the melody of the soul is joyous, it strengthens the vitality of the pulses and brings health to the body.